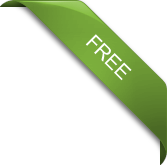 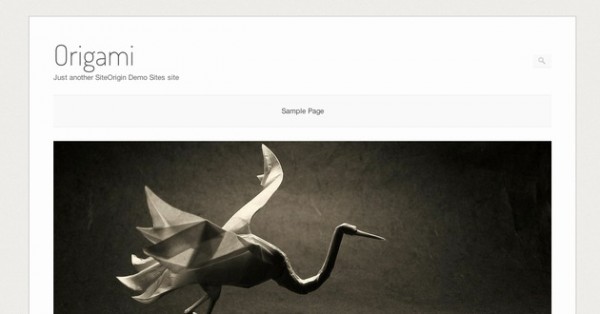 The idea behind Origami was simple. It needed to be as clean and minimal as possible so that all of a reader’s focus would be on the blog’s content. Origami has support for a lot of different post types which means it works well as a media blogging theme. You can add galleries, images and videos.

After you install Origami, you’ll need to install the simple options plugin. This extra step isn’t ideal – I’d have preferred to be able to dive straight into my theme options. It’s not too difficult though, you can install it in less than a minute.

Origami has a remarkably basic options panel. It lets you upload your own logo and favicon which useful. Besides that, it mainly just gives you the option to change some of the text and messages from around your site. If you’re happy with a plain text logo, you probably won’t even need to open up the options panel.

Origami takes a definite minimal approach with light colors, subtle contrasts and a complete absence of pizazz. You can see it’s had a fair amount of refinement, but there are still a few areas that could use some balance work. All in all, it’s good – especially for a free theme.

A slightly off white background dominates Origami’s design. There’s a subtle background texture which stops the theme from looking like a sea of yellow.

The search bar starts off small and bounces out to full size as soon as the user selects it. This is just enough animation to prevent the theme from feeling too static, but not too much as to take away from the minimal nature of the theme.

The typography is clear. It doesn’t do anything particularly creative here. It sticks to the standard Helvetica Neue with a regular weight and a healthy amount of spacing.

The headings use a Google Web Font called Dosis. It’s a thin, unassuming font that gives Origami a distinct feel. It offers enough visual differentiation from Helvetica Neue to give the headings some subtle impact.

Origami makes balanced use of white space around the headings.

Origami is a responsive WordPress theme. This means that it scales nicely to fit onto mobile devices. This is quickly becoming the most in demand feature of a WordPress theme so it’s always favourable when a free theme ships with this feature.

It handles repsonsiveness is a straightforward way. The main container width has a maximum width of 1024px. If you resize your browser, you’ll notice that the design catches the edges of the screen and starts scaling down to make full use of narrower width devices.

Origami essentially becomes a liquid width design. It keeps healthy padding and margins along the way.

The only real issue with responsive is the footer – which should collapse from a column layout to a row layout for mobile devices. (This is a feature that I will add in the next release)

Origami has rather comprehensive documentation as well as support on SiteOrigin’s support site.

Origami is fairly light in terms of features. This is one of its greatest appeals. It’s easy to get Origami set up, without learning anything.

Origami supports background images, which means that you’ll be able to customize it fairly easily. It also has a logo uploader if you don’t want to use the standard Dosis font logo. Origami doesn’t support logo resizing – so you’ll need to make sure your logo is the right size before you upload it. Origami’s default text logo is quite tall at 50px, but a logo should look decent around the 40px – 50px mark.

Origami doesn’t give you too much in the way of customization. Some people like this – some people don’t. You can always build together your own child theme and customize anything, using CSS.

Origami also uses Modernizr to load pollyfills for HTML5 features. This means that users visiting your site with a modern browser will get a full and fast experience. If your user is using an older browser, Modernizr automatically loads a Javascript pollyfill in the background to give your user a full, although slightly slower, experience.

Performance is becoming an ever more influential factor in the success of a blog and Origami does well in this area. Origami ships with minified versions of all its CSS. So you’ll get decent load times, even if you aren’t running W3 Total Cache.

Like most minimal designs Origami also doesn’t use a lot of images. This makes Origami quite zippy. Obviously you have to take your photos and content into account, but at least you know your theme isn’t slowing things down.

The few images that Origami does use are all in SVG format. It uses Javascript polyfills to give SVG support to older browsers.

Origami passes the entire WordPress theme review test, which is always a healthy sign. The code is clean and well written (again, keeping in mind that I wrote it). The CSS adheres to WordPress’ strict CSS coding standards. This means it’s consistent with countless other free themes. So it’s easy for you to read and edit Origami’s CSS.

Origami has reasonable support for child themes. The only issue is that it doesn’t have pluggable functions. Given that Origami is a minimal theme, you probably won’t want to go about plugging all the functions.

Origami is a simple theme – not much else. Some people will really like that but others will feel limited by its lack of features. If you’re looking for a quick way to start media blogging, then Origami is definitely for you.